The American leviathan in the dance music, SFX, is having trouble staying afloat.

The past few years no genre was as extremely popular as EDM, the American collective name for electronic dance music. The whole world is standing in line for the huge festivals that have been shooting out of the ground like mushrooms. Last year, the EDM market was estimated to be worth 6.9 billion dollars (6 billion euro), a growth of 12 per cent compared to a year before. Big business, you would say. And yet, the biggest player on the market is on the verge of bankruptcy.

SFX is the company of the American billionaire Robert Sillerman. He made a fortune in the 90s with the company SFX, with which he brought just about the entire pop and rock scene under one roof. He reasoned that this way it would be easier to professionalize the industry and make it more efficient. It turned out to be a visionary consolidation. Sillerman sold SFX to Clear Channel in 2000 for no less than 4.4 billion dollars.

Ten years later, nobody dared to doubt Sillerman, who wanted to do the exact same trick with a new genre. Because at that time, EDM was globally unstoppable. In 2012, Sillerman declared in the professional magazine Forbes that he wanted to spend 1 billion dollar to bring the entire dance scene together at - again - SFX.

Investors were all too eager to go along with this story. When SFX Entertainment went to Wall Street in October 2013 at a value of 13 dollars per share, the company collected 260 million dollars to spend on acquisitions. The company was then estimated at 1 billion dollars. But times change. Today, SFX is a meager share with a net worth of barely 85 million dollars. An attempt by Sillerman to take the company out of the exchange failed recently. More and more financial analysts believe that SFX is about to collapse.

How could it have gone so wrong?

It strongly appears that the eccentric Sillerman has spent the money too extravagantly. He spent large amounts of money on dozens of events and festivals all across the world, without taking into account the fact that EDM is a very young genre in which the established values are young and thin. And not all the names in SFX's portfolio seem to be able to attain that status.

To illustrate this: at the exchange in 2013 SFX's companies made company earnings (ebitda) of 14.5 million dollars. Now, the same companies, despite their increased revenue, have a negative ebitda of 15 million dollars. And SFX's cash reserves are very quickly wasting away, not an encouraging trend in a capital intensive market. A long story short: Sillerman wasn't critical enough and bought the hype.

When the pandemic hit the spring conference season and most of our customers had no choice but to cancel or postpone their events, we decided to expand our development team and focus all our efforts on extending our platform to fully support virtual and hybrid events. Now, you can grow and engage your audiences as one community, 365 days a ...

When the pandemic hit the spring conference season and most of our customers had no choice but to cancel or postpone their events, we decided to expand our development team and focus all our efforts on extending our platform to fully support virtual and hybrid events. Now, you can grow and engage your audiences as one community, 365 days a year!” Jelmer van Ast, Founder, and CEO

After months of hard work, our Event platform can now offer a handful of unbeatable benefits:

1. It’s cloud-based: directly from the browser, without the need to install any software.

2. It’s fully integrated with our event and society app platform and easy to use, offering a complete user-experience for attendees, speakers, and organizers.

3. It provides access for attendees on any device, from a full-screen web application on your laptop or desktop computer to a native mobile app, for smartphones and tablets.

Unite your online and live audiences around an interactive programme, increase the interaction between all stakeholders and capture actionable real-time analytics. 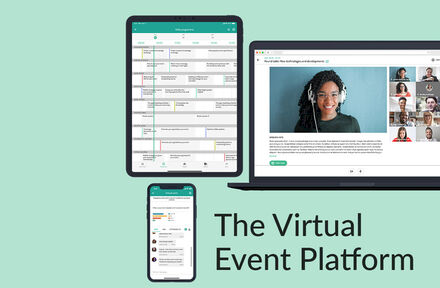 16 Ideas to Make Your Events Safer