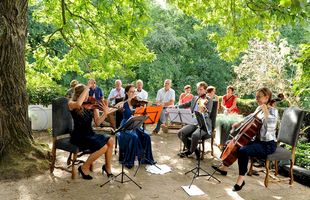 Che-Vanno is a string ensemble and consists of talented musicians (professional musicians & Conservatory students). Together they form a young and enthusiastic ensemble, variable in number.

Che-Vanno was founded in 2016 as a accompaniment ensemble and now accompanies choirs and plays as amplification for orchestras.

In addition, Che-Vanno plays during wedding ceremonies, receptions at weddings and corporate parties.

The repertoire consists of light classic and recognizable melodies from film and musical.
They have already accompanied various types of choirs and soloists throughout the Netherlands. From small-scale concerts in the east to large Advent concerts in the west.
Che-Vanno plays under the direction of captain and 1st violinist Chloë Elsenaar.
The ensemble consists of violins, viola, cello, double bass. On request it can be extended with other symphonic instruments.

We accompany choirs in small or larger occupations. And supplement the program with an intermezzo.

We play at your wedding during the ceremony or provide the music in the background at your reception.

We can arrange a very varied evening filling concert for you with our string quartet interspersed with solo songs.

There are no reviews about Concert & Organisatie Gerco (yet). Are you the first to share one?

To like Concert & Organisatie Gerco, you must first login.