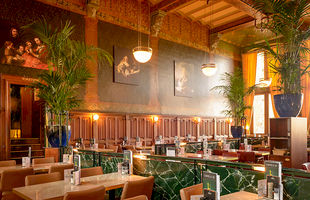 Experience the grandeur of the past in Grand Café Restaurant 1e Klas Amsterdam. A unique and monumental catering event location at the Central Station in Amsterdam.

The hidden pearl on platform 2B has several spaces and can also be exclusively rented for large or smaller groups. Both private and business you can come here for a drink, a delicious breakfast, lunch or dinner.

This historic top location provides meetings, meetings, conferences, dinners, drinks & events for both small and large groups and has two beautiful rooms. The private dining room or meeting room is suitable for groups of up to 32 people and the large room can be hired exclusively for various events for up to 250 guests.

Architect Pierre Pier Cuypers from Roermond designed the Central Station in Amsterdam in 1881-1889.

In Grand Café Restaurant 1e Klas the old waiting rooms have been completely restored and remained intact for the general public. Here you can still experience the old (waiting) times of yesteryear.
The Chief Government Architect is often mentioned in the same breath as the Rijksmuseum (1876-1885) and the Central Station in Amsterdam. Cuypers designed and restored many beautiful churches, chapels and monasteries. The Royal throne (1904) on which the throne speech (Prinsjesdag) is pronounced every year was also designed by this most famous Dutch architect. His craftsmanship is praised as the man who breathed new life into architecture in the Netherlands. Influential and inspirational pros like HP Berlage and Michel de Klerk

There are no reviews about Grand Café Restaurant 1e Klas (yet). Are you the first to share one?

To like Grand Café Restaurant 1e Klas, you must first login.