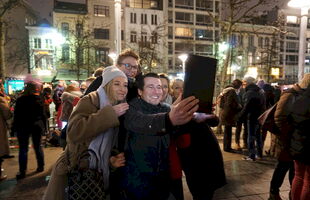 Since 2008, iChallenge has been taking you to every city of your choice in the BeNeLux, for an exciting, original, laughable or interactive Location Based City game. iChallenge makes and organizes the city game of your choice from A to Z. We provide both the necessary number of game guides, who give a clear explanation of the game to the participants and who are available during the game for all necessary assistance, as well as all the necessary game material, such as tablets and playing cards. For team building, family events, singles and groups of friends, there is a wide choice of standard, personalized and fully customized city games.

At Operation Freddy , none other than Gnome Freddy - an uncommon gnome on taller people - takes you to all the interesting corners of the city. There Freddy dropped lots of questions, DIY assignments and challenges! To keep discerning Freddy happy, you will be able to answer both open and multiple choice questions, take crazy pelvic selfies, or record composition photos with augmented reality. You will even have to gamble as if your life depended on it and so much more! A correct answer or an original version earns points. Anyone who makes a mistake can expect to hear Freddy boo.

For whom it may be more, Freddy can immerse you not only in the city, but also in the true team building atmosphere by adapting the questions and assignments to the theme and personalize it! in Freddy PLUS team building , iChallenge will formulate 1/3 of the questions with you, so that the participants are also tested on the knowledge of their own team! Bachelors groups can also play a Freddy PLUS Bachelors where the content of the game is in a true bachelor atmosphere and the single bachelor is put on the roster by tailor-made questions.

Those who prefer excitement and secret assignments will find The Target, a tactical and challenging game where a dangerous gangster escapes from prison. Three police teams are dispatched to catch the man before he collects € 1,000,000 and disappears from the radar forever. Who not only wants to commit robberies, but also wants to hunt the intellect, can free hostages from the clutches of the mad Dr. thanks to the unique Escape Game . Crypto! Previous fan of Sherlock Holmes? Then we design a true Codecrackers completely tailored to your team !

Rather looking for a game that is fully customized for your event? That is certainly possible! We develop a fully customized game with you, both in terms of content and location and game format!

There are no reviews about iChallenge bv (yet). Are you the first to share one?